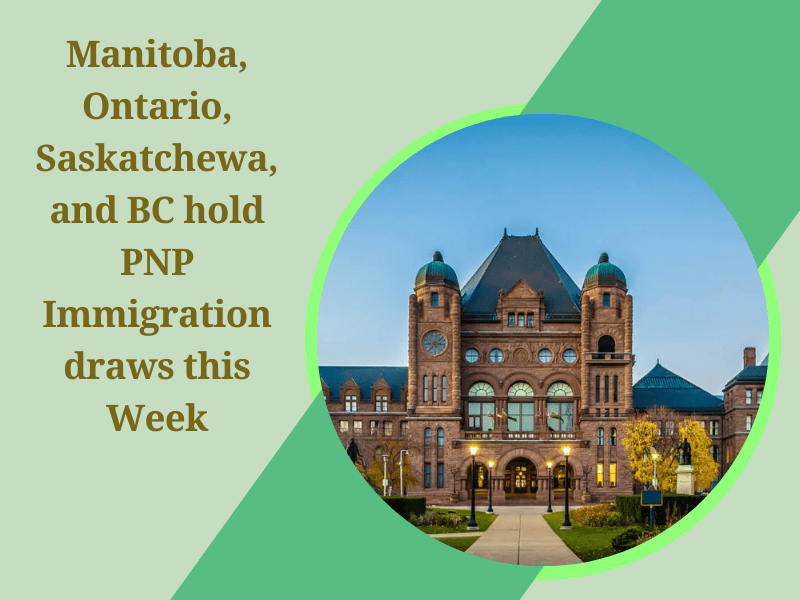 The provinces of Manitoba, Saskatchewan, Ontario, and British Columbia have announced results for their Provincial Nominee Programs (PNP) this week.

The majority of Canadian provinces and territories (with the exception of Nunavut and Quebec) control their own PNPs. Interested applicants, through these programs, may be invited to apply for a provincial nomination. Please note that provincial nomination is not the same as a permanent residence. However, it can act as the first step towards acquiring permanent residency for eligible applicants by getting the most out of your CRS score.

For example, PNP applicants with Express Entry profiles receiving a nomination get 600 points added to their score. As well, they become eligible to be invited to apply for a PNP-specific invitation round.

Following its launch way back in 1998, the program welcomed only 400 immigrants. Due to its success, however, it welcomes over 80,000 per year. The reason why there is an increase in the number of PNP admissions in the country is owing to the fact that the federal and provincial governments consider it a highly effective tool for promoting Canada’s economic development.

The province of Manitoba held its latest PNP draw on September 8. It issued 278 invitations through the Manitoba Provincial Nomination Program.

The invitations were categorized into three immigration streams:

Out of all the candidates who were invited to apply, 79 had profiles in the Express Entry system.

Ontario held a draw on September 7 under the Skilled Trades Stream of the Ontario Immigrant Nominee Program (OINP). 1,521 candidates were invited to apply with minimum scores of 320 and above. This stream is supported with Express Entry. It signifies that invited candidates receive additional CRS (Comprehensive Ranking System) points and an ITA (Invitation to Apply) for permanent residence at a draw from the Express Entry pool likely to be held in the future.

A total of 1,703 candidates were invited over two days on September 6 and 7 by Saskatchewan, almost doubling the number of candidates invited on the previous draw on September 1 – the largest draw this year.

The province held targeted draws on September 6 for a wide range of NOC occupations in demand and through the Express Entry program. Two draws were held in each category, totaling 760 candidates, as a result of different lowest scores. While some targeted NOCs required the lowest score of 61, others needed a 69 score.

The draw (held on September 7) invited 521 candidates through the Express Entry system and 422 through the Occupations-In-Demand stream for 943 candidates with a minimum score of 70 for each category.

The majority of candidates – 361 – were invited in a regional, targeted draw for tech occupations. In this regional draw, candidates with job offers outside Metro Vancouver Regional District were issued invitations. Also, applicants may have been invited based on other criteria, including:

Candidates were issued invitations in the Skilled Worker and International Graduates categories and consisted of Express Entry candidates.

The minimum SIRS score that was targeted for regional draw varied between 95 for Skilled Workers and Express Entry to 71 for Entry Level and Semi-Skilled candidates. SIRS operates much like the Express Entry Comprehensive Ranking System (CRS). However, it is only used for British Columbia’s PNP.