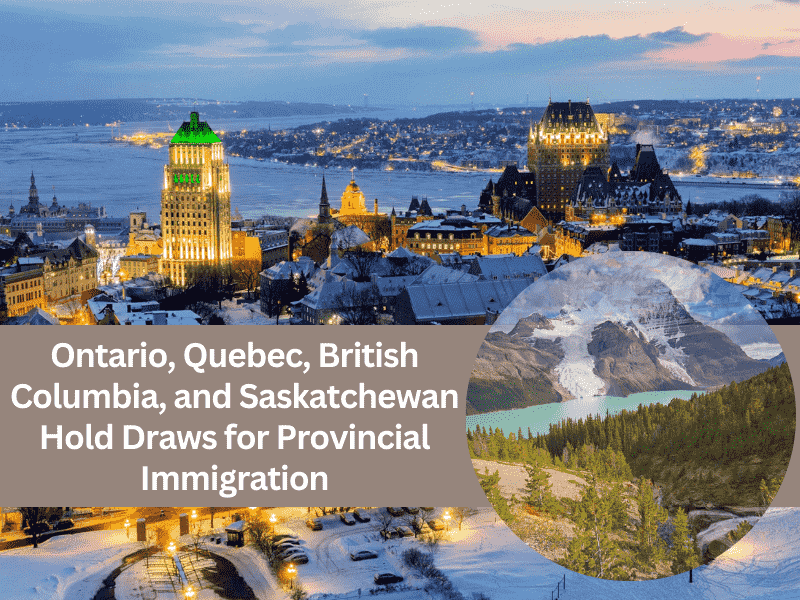 The provinces of Ontario, Quebec, Saskatchewan, and British Columbia have issued invitations to apply through provincial immigration programs this week.

The majority of Canadian provinces and territories (with Quebec and Nunavut as exceptions) manage their own Provincial Nomination Programs. Interested candidates, through these programs, may be invited to apply for a provincial nomination.

The immigration programs in Quebec are managed by the province and are different from immigration programs in Canada. Even though provincial nomination is not the same as a permanent residence, it can act as the first step toward gaining PR from Immigration, Refugees and Citizenship Canada (IRCC).
Launched in 1998, the PNP makes up more than 80,000 permanent resident admissions per year. There has been a rise in the number of PNP admissions in the country due to the federal and provincial governments considering it a highly-effective tool for promoting Canada’s economic development outside of the provinces and urban centres with already high immigrant populations.

The OINP (short for Ontario Immigrant Nominee Program) held two draws over the last two weeks. On September 23, the first draw was for French Speaking Skilled Workers stream. The Ontario province invited 363 candidates and the lowest score was 326.

The program is aligned with Express Entry and applicants are required to be French-speaking with a strong proficiency in English.

The second draw held was in the Human Capital Priorities stream. Ontario issued 1,179 invitations on September 28 through OINP as part of a targeted draw for tech occupations. Each candidate had job experience in detailed tech-related occupations.

The province of Quebec, on September 15, invited 1,009 skilled workers to apply for permanent selection. This draw is aimed at candidates with relevant work experience in in-demand occupations and a valid job offer outside the Communauté métropolitaine de Montréal.

Candidates had to have profiles in the Arrima EOI (Expression of Interest) system with scores of no less than 563 points.

It is the eleventh draw the province has held this year and the second draw in September. This seems odd as the Quebec province usually only holds draws monthly. In general, it does not usually release draw results until one to two weeks after draws take place.

The invitations were issued by the Ministère de I’Immigration, de la Francisation et de I’Intégration (MIFI) for immigration candidates applying under the QSWP (short for Quebec Regular Skilled Worker Program).
Those candidates who are invited to apply for permanent selection by the province have a maximum of 60 days for submitting their application and paying a processing fee. The aim of Quebec is to process complete applications within six months, starting on the date all the information has been received. This consists of forms and documents.

On September 28, over 258 candidates were invited to apply for a provincial nomination in BC.
The majority of candidates, 215, were invited in a targeted draw for tech occupations. The invitations were issued to candidates in the categories: International Graduates and Skilled Workers and incorporated Express Entry candidates.

Candidates who were invited to the target tech draw had the lowest SIRS scores of 100. SIRS (short for Skills Immigration Registration System) acts much like the Express Entry CRS (Comprehensive Ranking System). However, it is only used for PNP in the British Columbia province.

British Columbia held rounds of invitations for candidates working in the below-mentioned occupations:

The Saskatchewan province has invited 639 candidates under the Express Entry program, and 507 under the Occupations-In-Demand stream, of the SINP (Saskatchewan Immigrant Nominee Program) for a total of 1,146 candidates.

The draw is constant with draws through summers, the most recent of which invited more than 1,000 candidates. It is the first draw to be held since September 7. No draw was held last week, which makes it the first week without a SINP draw since July 6.