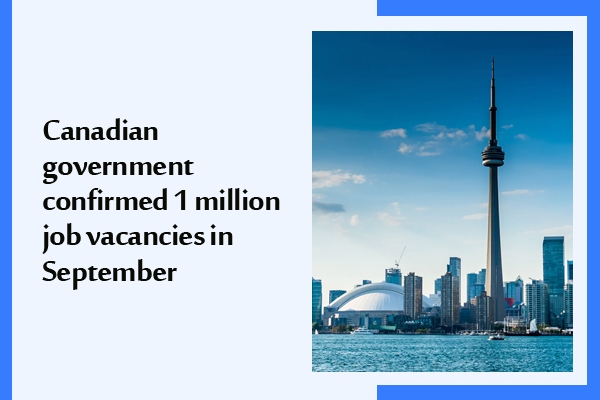 Canada’s economy is still at the recovering zone from the novel Corona virus pandemic, according to a new Statistics Canada report. A total of 91,100 people were added to payrolls across Canada in September, representing the fourth straight monthly increase.

Moreover, the Payroll employment increased in eight provinces. Ontario led the way with over 43,000 new employees added to payrolls. British Columbia (BC) was second, followed by Quebec.

The country has gained job options which are driven by the services-producing sector, namely accommodation and food services, public administration, and finance and insurance.

Statistics Canada notes that the re-opening of the Canada-U.S. border in August and easing of travel restrictions for tourists in September may have contributed to job growth in tourism and related sectors.

Also, there are over half of businesses in accommodation and food services that reported they expect to face obstacles in recruiting the right candidates. Just 30 per cent of all other businesses report similar concerns.

Meanwhile, both the construction and manufacturing sectors had over 80,000 vacant positions each.     Statistics Canada explains that an increase in job vacancies may signal an increase in economic activity and hiring as employers create new roles. It may also signal worsening structural labour market imbalances, such as skills shortages and geographic mismatches between vacancies and workers capable of filling them. It also potentially signals a change in the willingness of workers to accept wages, hours, and other factors associated with job vacancies