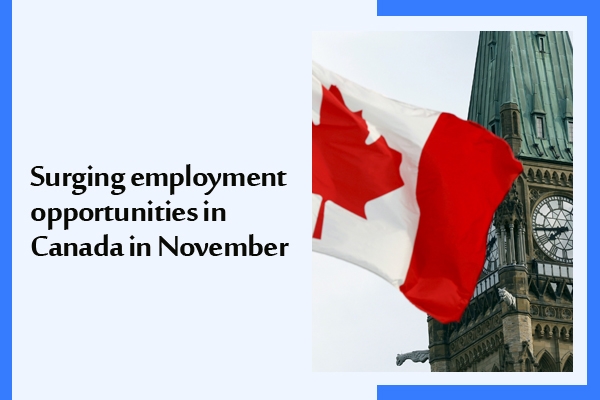 The Canadian jobs statistics are soaring beyond predictions and the unemployment percentage is dropped to near pre-pandemic levels. The sources indicated that Canada’s economy is recovering at a good pace.

Last November, 154,000 jobs were added by Canadian employers in the economy. Last month’s growth exceeded analysts’ predictions of 38,000, which was closer to October levels. The gains pushed employment a full percentage point higher than pre-pandemic levels. Also, unemployment dropped to 6%, which is within 0.3 percentage points of what it was in February 2020.

It was reported that in November the hiring was driven by the private sector both in full-time and part-time positions. Even so, Canada is still experiencing labour shortages across sectors like hospitality, retail, and health care. In September, there were roughly one million vacancies across the country.

Most government COVID-19 financial assistance measures ended in late October. Some analysts say it may have pushed people to accept job offers. Among these measures was the Canadian Recovery Benefit for individuals, which had been accused of discouraging people from returning to work.

“November’s job growth suggests the withdrawal of the [Canadian Recovery Benefit] may have pushed some workers back into employment though alone this will not be sufficient to address the significant labour shortages affecting several industries,” writes economist Liam Daly.

RBC economist Nathan Janzen wrote that “despite the surge in employment there were still exceptionally low levels of workers in the service sectors.” In addition to it, he stated, “Employment in accommodation & food services edged up 5k from October but is still more than 200k below pre-shock levels. Travel and hospitality spending has been rebounding, but with the unemployment rate now substantially lower, it is increasingly clear that there are not enough remaining unemployed workers out there to re-fill all of those jobs any time soon.”