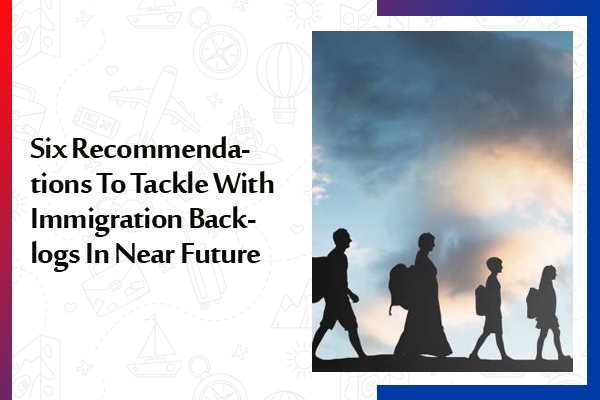 Earlier this month the Canadian Parliament’s Standing Committee on Citizenship and Immigration (CIMM) began a study on IRCC’s application processing times and backlogs.

The purpose of CIMM is to provide oversight of the immigration system and release studies that contain recommendations for improvement.

The backlog has doubled since the start of the pandemic to 2.1 million people. This includes applicants for permanent residence, temporary residence, and citizenship. Needless to say, the backlog is hurting Canada’s economy, keeping families apart, and undermining Canada’s ability to provide humanitarian assistance to those in need.

The following are six steps that can be helpful for improving the state of Canadian immigration operations.

The first step Canada needs to take to avoid backlogs from getting out of control again in the future is by treating all of its immigration applicants with far more respect. When we discuss backlogs, we often think about the number of files in the queue, and sometimes we forget about the number of human lives that are being negatively affected.

Taking a more human-centric approach to our immigration system is a necessary step towards progress. There is no justification for IRCC going months or even years on end without responding to enquiries from its clients. The lack of urgency to provide updates also explains why there has been a lack of urgency to process applications.

The second step is for Canada to do a better job of aligning its intake with its processing capacity. We already do this with various programs such as IRCC’s economic class pilots, the Parents and Grandparents Program (PGP), the Provincial Nominee Program (PNP), among others. Federal and provincial governments work within the confines of the allocation for a given program and ensure they do not solicit more applications than they are capable of processing within the allocation. This is not a perfect model and often leads to disappointment, as is the case with the PGP, but at the same time it helps us limit the potential for excessive processing times.

The third step is for Canada to expedite the badly-needed technological transformation of its immigration system. Much of the immigration system remains paper-based, which slows things down. Moreover, it makes it difficult for staff to process applications remotely and to transfer files to other offices. IRCC should strive for all applications to be online within the near future, while at the same time providing accommodations for those who have disabilities, the elderly, among others who may need to submit paper-based applications. Technology is a major asset to the immigration system, and can expedite many processes. At some point we should strive to complete as many immigration processes online, such as changing visas status for those in Canada, and citizenship ceremonies.

The fourth is for Canada to be more transparent on the state of immigration policies and operations. IRCC has kept us in the dark for much of the pandemic rather than fulfilling its obligation to inform the public on its policy priorities and state of operations. For instance, it went between December 2020 and April 2022 before telling Federal Skilled Worker Program (FSWP) candidates when they would be invited under Express Entry again. It did the same for Canadian Experience Class (CEC) candidates between September 2021 and April 2022. Moving forward, IRCC should provide regular public updates, preferably on a monthly basis, outlining what its current policy priorities are, and the state of its backlogs. This will allow all stakeholders including applicants themselves, employers, post-secondary institutions, and more, to be able to plan accordingly.

The fifth step is for Canada to be more accountable about its immigration system shortcomings during the pandemic. An independent study should be commissioned to evaluate what IRCC did right, what it did wrong, and what it can do better. While the pandemic is a valid excuse, it is not the only explanation why the backlog has ballooned over the past two years.

An independent study can shed light on the policy and operational causes of the backlog and provide recommendations so the mistakes do not happen again. Being more accountable will also help to restore trust in Canada’s immigration system. Many stakeholders have had a bad experience during the pandemic which has hurt the reputation of our immigration system.

Sixth, the Canadian government needs to collaborate more with Canadian immigration experts. Canada has a large immigration ecosystem full of experts from many different industries such as law, business, the settlement sector, research, academia, governments, post-secondary institutions, and more. Yet, there have been few meaningful immigration consultations during the pandemic, leading to avoidable consequences. Forming a National Advisory Council on Immigration (NACI) would be a positive step towards harnessing all this expertise so Canada can make the best immigration decisions possible. These sorts of expert councils exist among other Canadian government departments. Forming one on immigration would be a major asset for IRCC.