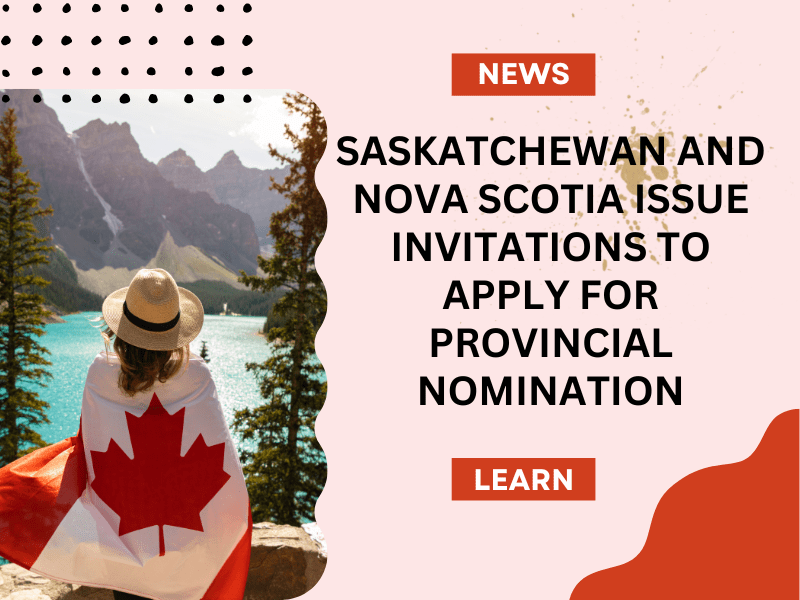 Nova Scotia and Saskatchewan have issued ITAs (Invitations to Apply) to skilled worker candidates through their PNPs (Provincial Nominee Programs) this week.

The majority of provinces and territories (with the exception of Quebec and Nunavut) in Canada operate their own PNPs. Interested candidates, through these programs, are likely to be invited for a provincial nomination. Provincial nomination acts as the first step towards obtaining permanent residency from IRCC (Immigration, Refugees and Citizenship Canada), albeit it is not the same as a permanent residence.

Immigration programs in Quebec are administered by the province itself and they are distinct from Canadian immigration programs. Quebec is the only province, which has control over all economic class immigrants.

The provincial nominee program is responsible for more than 105,000 PR admissions to Canada per year. It commenced in 1998 and has progressively improved the number of PNP admissions yearly. That is because the federal and provincial governments consider it a highly effective tool for the promotion of Canada’s economic development outside of the provinces as well as urban centres with an already high population of immigrants.

The province of Nova Scotia, on November 8, issued letters of interest to applicants through the Nova Scotia Labour Market Priorities stream for the first time since February.

The office of immigration in the province has not responded to requests for the number of letters issued. However, it has released the criteria for receiving one. Candidates are required to meet the eligibility baseline as mentioned below:

Applicants who took a decision to apply to Nova Scotia after receiving their letter are required to incorporate copies of both language tests and education proof, which include an ECA (Educational  Credential Assessment).

The Saskatchewan province issued 35 invitations to apply through the SINP (Saskatchewan Immigrant Nominee Program) on November 8.

Saskatchewan invited 21 candidates from the Express Entry category and 10 from the Occupations-In-Demand category. The minimum EOI (Expression of Interest) score in both categories was 69. All applicants invited had Educational Credential Assessments.

Also, the province invited four applicants currently living in Ukraine to respond to the current conflict.

This is the first SINP draw to be held since September 28. Several provinces t have paused their PNP draws in anticipation of NOC 2021. The current National Occupational Classification system will be updated to reflect a new classification method for skilled workers, wishing to come to the country under an Express Entry program.