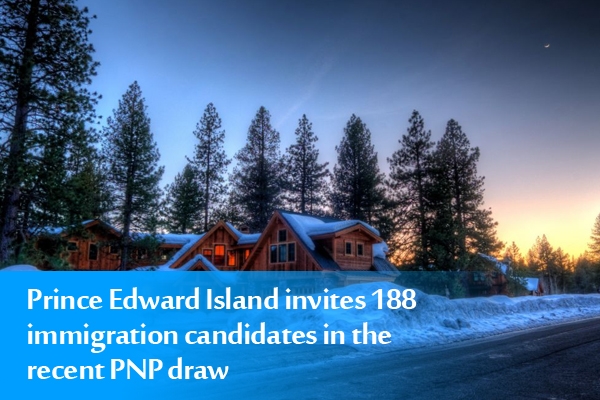 Prince Edward Island held its scheduled immigration draw on November 18 wherein it welcomed 188 immigration candidates to apply for a provincial nomination. It brings the number of PEI PNP invitations issued this year to 1,729.

The PEI PNP’s Express Entry Category is an enhanced PNP, which means it is linked with the federal government’s Express Entry system. In order to be considered for this stream, candidates need to have a profile in the system.

Eligible candidates get a Comprehensive Ranking System (CRS) score for their age, work experience, education, and language proficiency in English or French.

Express Entry candidates who receive a provincial nomination are given an additional 600 points toward their CRS score and are effectively guaranteed an Invitation to Apply (ITA) for permanent residence in a subsequent Express Entry draw.

In order to be considered for a provincial nomination from PEI, Express Entry candidates need to create an Expression of Interest (EOI) profile with the PEI PNP.

The Labour Impact Category is for foreign nationals who have a valid job offer in PEI, and have support from their employer. It is divided into three streams: Skilled Worker, Critical Worker, and International Graduate.

Candidates in this category must also submit an Expression of Interest in order to be considered for a provincial nomination through the Labour Impact Category.

Business Impact Category In Business Impact Category candidates need to meet the minimum provincial score requirement in order to proceed with their applications. The score is different in every draw. The invitations that PEI sent in today’s draw were issued under the Work Permit Stream, which is for foreign entrepreneurs who want to own and operate a business on the island.