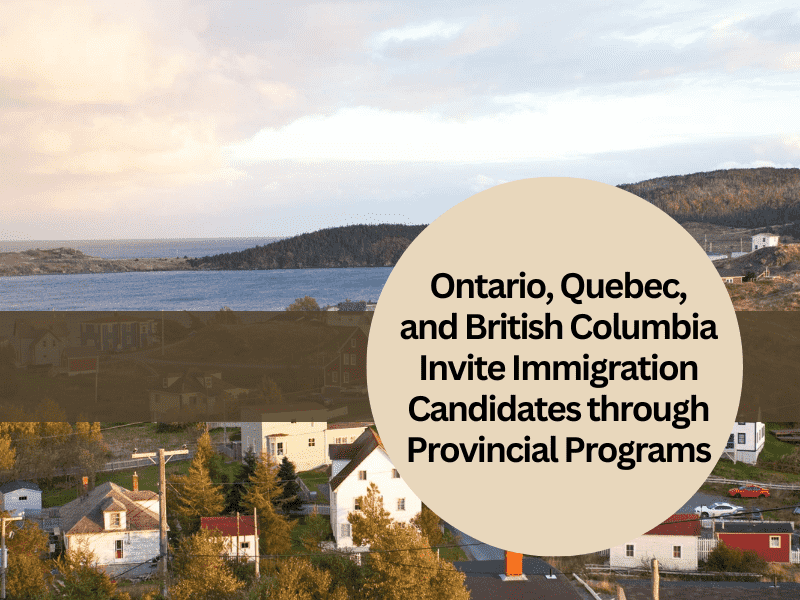 The provinces of British Columbia, Ontario, and Quebec have issued ITAs (Invitations to Apply) to applicants through provincial immigration programs this week.

The majority of provinces and territories in Canada (with the exception of Quebec and Nunavut) manage their own PNPs (Provincial Nomination Programs). Through these programs, interested applicants will likely be invited to apply for a provincial nomination.

The PNP has intensified in importance considerably since its launch over two decades ago and comprises more than 80,000 PR admissions annually. The rise in the number of Canadian PNP admissions is due to the fact that federal and provincial governments consider it to be a highly effective tool for the promotion of Canada’s economic development.

The province of Ontario, on September 20, issued ITAs to 823 applicants in the Master’s Graduate stream of the OINP (Ontario Immigrant Nominee Program). Applicants required the lowest score of 33 or higher to be eligible.

In addition, candidates in this stream should meet a baseline of eligibility criteria including the following:

Ontario is the most densely inhabited province and welcomes the highest number of newcomers each year. Also, it has the largest allocation of invitations to apply available under any PNP in the country. For 2022, the province of Ontario is able to issue invitations to 9,750 applicants.

Quebec invited 1,202 skilled and talented personnel to apply for permanent selection on September 8, 2022. This is the tenth and the largest draw in the Arrima Expression of Interest system this year. Quebec does not generally release draw results until one to two weeks after draws take place.

Applicants had to have profiles in the Arrima Expression of Interest system with scores of no less than 620 points.

Those applicants who are invited to apply for permanent selection by the Quebec province have a maximum of 60 days for submitting their application and payment processing fees. The province seeks to process complete applications within six months, starting on the date all the required information has been received. This contains all forms and documents.

If successful, applicants will get a Certificat de sélection du Québec (CSQ or Quebec Selection Certificate). They can use this document for applying for permanent residence in the federal government of Canada.

The majority of candidates, 341, were invited in a targeted draw for tech occupations. The invitations were issued to applicants in the Skilled Worker and International Graduates categories and included Express Entry candidates. Also, the draw contained Entry Level and Semi-Skilled applicants.

The lowest SIRS score for the targeted regional draw ranged from 91 for Skilled Workers with Express Entry to 70 for Entry Level and Semi-Skilled candidates. SIRS works much like the Express Entry Comprehensive Ranking System (CRS). However, it is only used for PNP in British Columbia.

The province also held invitation rounds for candidates working in the below-mentioned occupations: