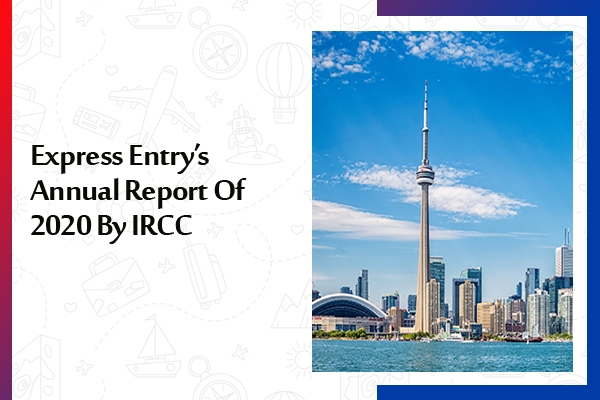 As it’s almost the end of 2021, thus here we are representing last year’s Express Entry Year Report which was officially released on December 13. It shows us who got to immigrate to Canada through Express Entry, and how the pandemic affected Canada’s main immigration application system.

To start with, there are more permanent residents admitted than there are invitations issued, since one application can contain the principal applicant and their family members. However, in 2020, the pandemic caused Express Entry admissions to plummet below the level of ITAs. In 2020, Immigration, Refugees and Citizenship Canada (IRCC) issued more than 107,000 Invitations to Apply (ITAs), compared to 2019 when IRCC issued 85,300. Out of the ITAs issued in 2020, only 63,923 Express Entry applicants and their family members got permanent residence, whereas there were 109,601 new permanent residents admitted in 2019.

IRCC did not meet the processing standard of finalizing 80% of Express Entry applications within six months. The average processing time was nine months, which is one month slower than 2019. IRCC says about 51% of applications in 2020 were completed within the six-month standard. The following table is based on data that was up-to-date in January, 2021.

IRCC concentrated its invitations to apply at candidates who were eligible for the Canadian Experience Class (CEC) and Provincial Nominee Program (PNP), as they are more likely to be physically located in Canada and less likely to be impacted by public health measures.

As in previous years, more Express Entry profiles were submitted by men than women. However, the proportion of women in the Express Entry pool grew to 43% in 2020 compared to 41% in 2019.

IT streams still leading the way

Once again, occupations in information technology, and business and financial services continued to dominate among candidates invited to apply for permanent residence. Special to 2020 though, more food service supervisors and administrative assistants received ITAs. IRCC says this is likely the result of holding more CEC-specific rounds of invitations.

The most common occupations among candidates who got arranged employment points were food service supervisors and computer programmers. This is also new to 2020, and likely a result of the CEC draws.

It has been noticed that there were more candidates in the pool as compared to previous years. People who had a Comprehensive Ranking System (CRS) score in the 351-400 range, an increasing number fell into the 451-500 range. The proportion of candidates with these higher scores increased to 27%, compared to 22% in 2019, and 18% in 2019. About 27% of candidates were in the 300-350 range.

IRCC says 42% of invitations in 2020 went to candidates who had Canadian education, up from 28% in 2019. This is another result of the increase in CEC-only draws.

When looking only at all-program draws, the CRS cut-off score range in 2021 was slightly higher than 2019. Scores averaged to about 472 in 2020, compared to an average of 461 in 2019. This increase suggests that the Express Entry pool became more competitive in 2020 for FSWP candidates and FSTP, as a result of IRCC’s efforts to target CEC and PNP candidates.

In 2020, IRCC also increased the number of points available to French-speaking and bilingual candidates in the Express Entry pool. On October 20, 2020, the number of points awarded through Express Entry went up from 15 to 25 for French-speaking candidates, and from 30 to 50 for bilingual candidates. This change is intended to support Canada’s goal of increasing French immigration outside of Quebec to 4.4% by 2023, and improves French-speakers chances of receiving an ITA.