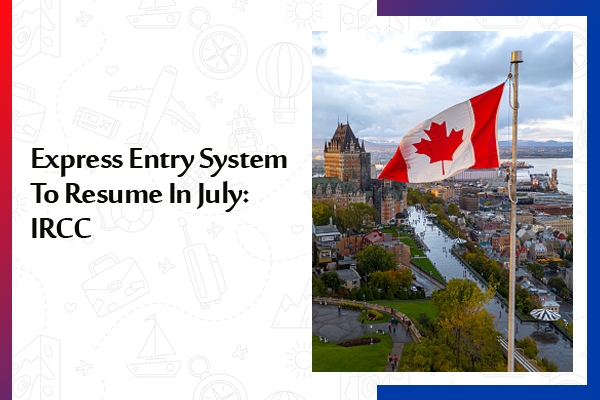 Canada is all set to resume its Express Entry draws for Canadian Experience Class (CEC), Federal Skilled Worker (FSW) and Federal Skilled Trades (FST) candidates in early July, to fill hundreds of thousands of vacant positions in all sectors across the country.This news will gladden the hearts of aspiring Indians and also international students, already in Canada, whose plans of obtaining permanent residency in Canada had been badly derailed.

For the past several years, Indians have led the charts both in terms of the number of invites issued to become permanent residents and those admitted as permanent residents. To illustrate: In 2020, Indian citizens bagged 50,841 invites to apply for permanent residence in Canada, under the ‘Express Entry’ route. This was 47% of the total invites (1.07 lakh) which were issued by IRCC.

This announcement of Canada widening its doors under the Express Entry route was made by Fraser, Minister of ‘Immigration, Refugees and Citizenship Canada’ (IRCC). The immigration agency adds that the majority of the new applications will be processed within the 6-month service standard.

IRCC notes that the Express Entry backlog has been cut by more than half from nearly 112,000 people in September 2021 to 48,000 in March 2022. It has also doubled the number of permanent resident decisions made in the first quarter of 2022 compared to the same period in 2021. IRCC finalized 156,000 permanent residence decisions between January 1st and March 31, 2022. In addition, IRCC has processed over 100,000 work permit applications in the first quarter of 2022, compared to 58,000 during the same period last year.