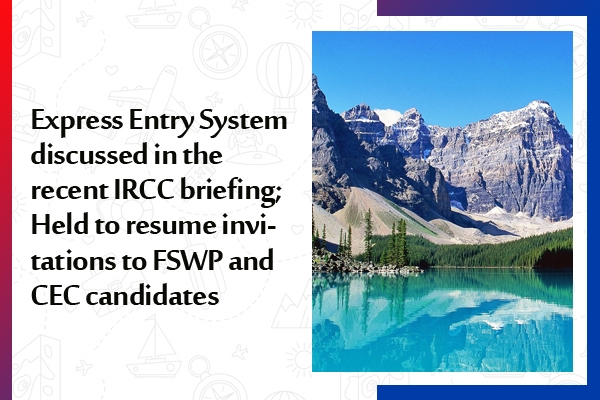 Last week an internal IRCC meeting brief was made public, creating speculation and confusion on how Canada’s immigration department will manage Express Entry in 2022 and beyond.

Signed on November 24, 2021, the meeting provides background information on why Immigration, Refugees and Citizenship Canada (IRCC) has not issued express entry invitations to FSWP candidates since December 2020 and to CEC candidates since September 2021. The briefing is heavily redacted so it is not possible to draw firm conclusions from it. Despite its ambiguous nature, the briefing indicates the pause is to allow IRCC to reduce its application backlogs so it can eventually get closer to its stated service standard of processing Express Entry applications within six months. Processing times are currently longer as the department plays catch up.

As noted in the newer IRCC memo, Express Entry backlogs have grown due to reasons such as previous travel restrictions as well as the department’s focus to transition those in Canada to permanent residence to achieve their immigration levels goal of landing 401,000 PR in 2021.

IRCC says as it considers options for its Immigration Levels Plan 2022-2024, Express Entry admissions are likely to “face a significant reduction to accommodate other ministerial and departmental priorities.” Some preliminary scenarios at the time of the memo suggested decreases of more than 50% of the 110,500 that was allocated in the current 2021-2023 levels plan. These reductions may be required, according to the memo, to accommodate the TR to PR pathway, and the Canadian government’s goal to resettle 40,000 Afghan refugees. The new levels plan will be announced by February 12, 2022.

The memo is unclear about when draws to FSWP, CEC, and FSTP candidates will resume. It states that an estimated 76,000 Express Entry persons will be on inventory at the start of 2022 which is significantly higher than what it needs to meet its admissions targets and thus no new Express Entry intake is required for at least the first half of 2022. One of the unclear aspects of this discussion is whether IRCC means “invitations” or “intake”.

The department wants to cut its Express Entry application backlogs by more than half before considering broadening its express entry draws again. The reason for this is IRCC wants to ensure it can process the applications of those invited in a quicker manner. Based on its recent ability to finalize over 16,000 express entry applications per month, IRCC may very well be in position to cut its Express Entry backlog by over 50 per cent within the early part of 2022. Hence, technically speaking, IRCC can resume invitations to FSWP, CEC, and FSTP within the coming months knowing that some two additional months will pass before they receive additional intake.

The forthcoming levels plan announcement in February will offer some additional clarity. The levels plan is constantly revised leading up to its official announcement as IRCC evaluates a host of operational and policy considerations up to the very last minute. This leaves open the possibility that the November 2021 memo is no longer indicative of IRCC’s Express Entry strategy.

It is important to note that IRCC potentially reducing Express Entry admissions in 2022 does not necessarily mean it will stop inviting more Express Entry candidates this year since admissions and invitations are two different metrics.

An admission is the very end of the Express Entry process and is currently taking around at least one year from start to finish due to the application backlogs. The memo notes the current processing standard for CEC candidates is about 8 months and about 20 months for FSWP candidates.

Due to the prolonged nature of this process, IRCC continues to issue Express Entry invitations in the meantime. When IRCC receives a completed permanent residence application, it can choose to process it immediately, as it commonly did before the pandemic. Or, IRCC can begin to process the application at a later date, as it is currently doing in response to the evolving pandemic situation as well as addressing changing policy priorities.

It is in Canada’s policy interests to resume Express Entry invitations to FSWP and CEC candidates in short order.

Upon its launch in 2015, Express Entry sought to invite the highest scoring candidates to apply for permanent residence. Its dynamic nature sought to end backlogs since IRCC only needs to process the applications of those it invited rather than processing every application it receives. Unfortunately, IRCC has departed from inviting the highest scoring candidates and backlogs have grown due to it shifting its resources to prioritizing permanent residence applications submitted within Canada as well as the processing of Afghan refugee applications.

Back in 2015, IRCC argued that using the CRS and rank candidates was the best way to identify new immigrants most likely to successfully integrate into Canada’s economy. The CRS was informed by many decades of Statistics Canada research and hence is meant to be a scientific way of selecting the Canadians of tomorrow. Thus, it is in Canada’s best interests to use the CRS as the main determinant for Express Entry invitations. One may even argue a stronger case can be made to stick with the CRS now, during an economically turbulent period, since Statistics Canada research also shows immigrants who land during a recession have weaker economic outcomes throughout their careers in Canada than those who land during stronger economic times.

An argument to stick to the CRS can also be made on grounds of fairness. Between 2015 and the end of 2020, IRCC had been overwhelmingly issuing Express Entry invitations based on CRS score but departed from this approach in January 2021 without warning. Many candidates entered the Express Entry pool after taking steps to maximize their CRS score or have taken steps since entering the pool to improve their CRS score. Such efforts have gone for naught through no fault of their own due to IRCC shifting the goalposts on them with no advanced notice (IRCC remains quiet on its Express Entry plans for 2022).

The backlog of FSWP and other applications of skilled workers abroad is proving costly since it is resulting in weaker population, labour force and economic growth. Canada’s population growth is the weakest since 1915/16 and the country is currently grappling with the highest job vacancy rate on record with nearly 1 million currently unfilled. Crucial industries across the Canadian economy from health care, to transportation, to agri-food, and many others are in dire need of more workers. It goes without saying then, it is in Canada’s economic interests for IRCC to get the application processing of skilled workers abroad back on track so they can soon arrive to alleviate the labour shortages that are slowing the country’s economic recovery.

Finally, the pause in CEC draws since September is also concerning from both economic and fairness perspectives. CEC candidates tend to work for Canadian employers and are able to remain with them indefinitely after getting permanent residence via Express Entry. Many CEC candidates risk losing their legal status due to the absence of Express Entry invitations which may force them to leave the country. This would result in less economic activity in Canada and contribute to additional labour shortages and pressure for Canadian employers. From a fairness point of view, it would not be right to also shift the goalposts on such individuals with no advanced notice, and ask them to leave the country, after they have spent years contributing to Canada’s economy and society.