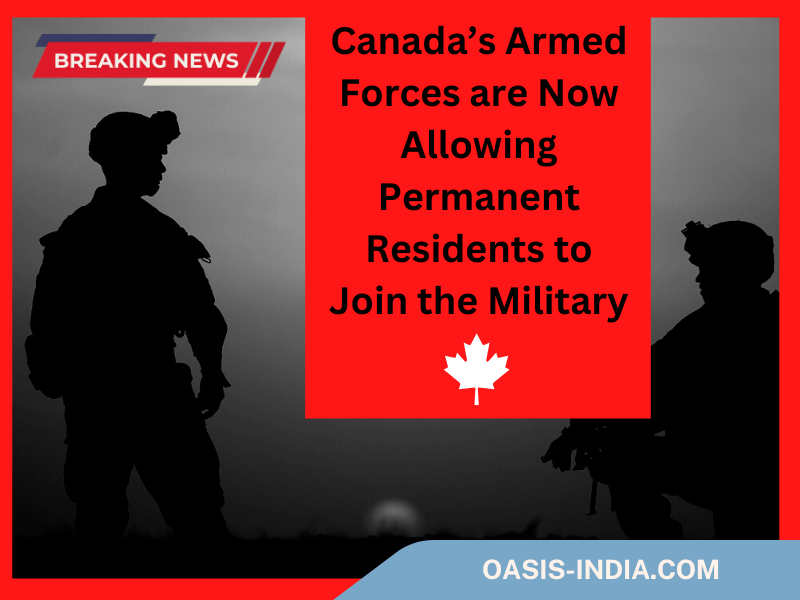 Last week, armed forces in Canada created a post on Instagram declaring that PRs (Permanent Residents) will soon be eligible to join CAF (Canada’s Armed Forces). The Instagram post came a week before Remembrance Day, which was yesterday.

The citizens of Canada, every November 11, gather to commemorate the contributions and sacrifices made by the members of the armed forces. This tradition commenced at the end of World War One in 1918 and marks the moment when the war officially came to end, at 11 a.m.

Canadians frequently attend ceremonies at local cenotaphs for commemorating and remembering those who served. Others merely take two minutes at 11 a.m. to stop whatever they are doing so they can reflect in silence.

CAF is Looking for a Large Number of Force Members

The DND (Department of National Defence) is expected to make a formal declaration in the approaching days with respect to the change in the policy. Permanent residents, until now, were not allowed in the CAF owing to issues surrounding security clearances. The CAF currently is dealing with an urgent shortage of recruits.

Why are Canadian Permanent Residents Allowed to Join the Army?

The news comes as the most important change in recruitment policy. In March, defence minister Anita Anand stated that the military in Canada needs to grow, specifically taking the Russian invasion of Ukraine into consideration. However, at the end of April 2022, the CAF stated it was not ready to waive the requirement for Canadian citizenship.

This change comes into effect as the country has released the Immigration Levels Plan for 2023-2025. The plan is aiming for 500,000 new permanent residents in the country annually by the end of 2025. This is likely to considerably broaden the pool of applicants the military has to choose from.

Roughly a quarter of Canadians are or have been landed immigrants or permanent residents. Also, immigrants are prime candidates for the military as they usually enter the country during their younger working-age years when they may be more physically active.

At present, the only way for permanent residents to join the CAF is through the SMFA (Skilled Military Foreign Applicant) program. This program is designed for people with a unique skill set that would lower the training cost or fill a special need within Canada’s Armed Forces, including a doctor or a trained pilot.

At the moment, candidates are required to be Canadian citizens, over 18 years old (or 16, providing they have their parent’s consent), and have a grade of 10 or grade 12 education depending on if they plan to join as an officer. This will apply to permanent residents as well.