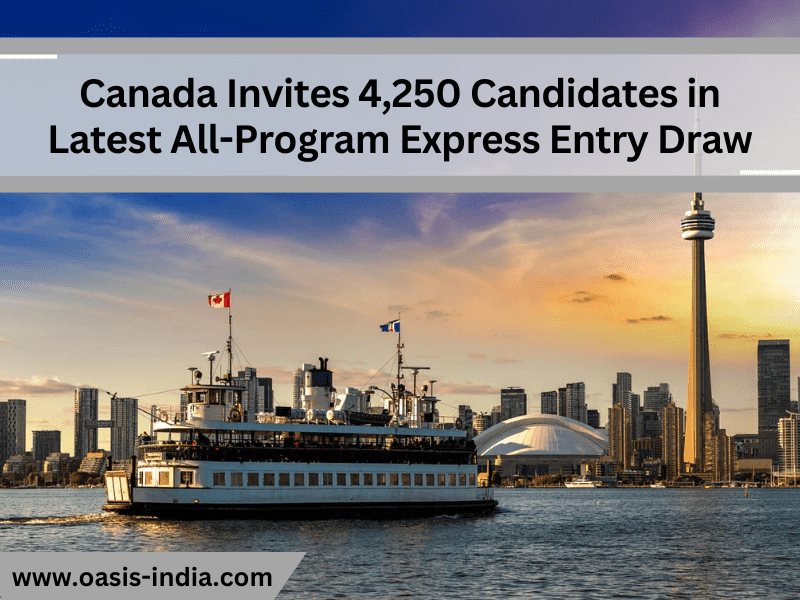 The most recent all-program Express Entry draw in Canada was held on October 12, 2022. It was the eighth all-program since they recommenced on July 6.

IRCC (short for Immigration, Refugees and Citizenship Canada) issued invitations to 4,250 candidates with a CRS (Comprehensive Ranking System) score of 500 as a minimum. Applicants were eligible to receive invitations from the Federal Skilled Trades Program (FSTP), Federal Skilled Worker Program (FSWP), and the Canadian Experience Class (CEC) – all programs that are operating under the Express Entry system.

Express Entry all-program draws were paused for more than 18 months with commencement in December 2020. While the pause was in effect, only candidates from the PNP (Provincial Nominee Program) or CEC were issued ITAs (Invitation to Apply). The pause came into effect owing to the backlog in applications, which was caused by travel restrictions with regard to COVID-19. Also, IRCC paused draws for the CEC in September 2021.

The draw of today is a continuation of lower CRS scores. Reducing the CRS score enhances the number of candidates who are eligible to receive Invitations to Apply through the Express Entry system. This has been the trend since draws began again on July 6. The score for that draw was 557 and for the first five draws, lowered by 8 or 9 points each time. The two draws that were held recently on September 14 and 28 witnessed small decreases of 6 points.

Physicians Can Apply for the Express Entry Program

Also, Canada has removed some hurdles preventing physicians who are already living and working in the country as temporary residents from applying for EE (Express Entry) programs.

Physicians were not eligible. That is because, most frequently, the medical system in Canada works on a “fee-for-service” model, which is different from a traditional employer/employee relationship. This signifies, in a technical sense, physicians are regarded as self-employed. Self-employed work experience gained within Canada is not eligible to be incorporated as part of the application for Express Entry.

A candidate, being self-employed on his/her own, is not ineligible. If the candidate has gained no less than one year of work experience in a foreign country, or as a Canadian employee, they are likely to be eligible for the Express Entry system.

The exception for physicians is one of the first changes to Express Entry, which can be expected to carry on till 2023. Bill C-19 received Parliament’s Royal Assent in June. It will give IRCC more authority to target candidates for the Express Entry program based on education, language proficiency, or work experience, rather than the existing system of issuing ITAs to a broader range of candidates exclusively on their CRS scores.

The Express Entry system makes use of a points-based system – the Comprehensive Ranking System (CRS) – for ranking the profiles of candidates. Candidates with the top scores receive an ITA (short for Invitation to Apply) and can apply for permanent residency.

After the candidate applies, an IRCC officer assesses the application and makes a decision if they are approved. The officer will ask for biometrics and is likely to set up an interview or even request more documents. Once this is complete (if approved), the candidate is now a Canadian permanent resident and he/she gets one step closer to becoming a citizen of Canada.