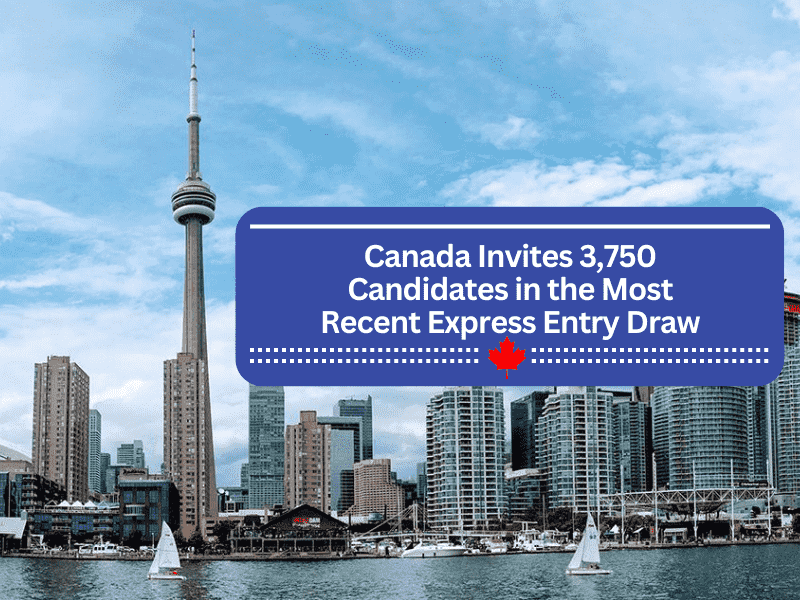 Canada held an all-program Express Entry draw on September 28, 2022. It was the seventh all-program draw since they resumed on July 6.

IRCC (short for Immigration, Refugees and Citizenship Canada) issued invitations to 3,750 applicants with a comprehensive ranking system (CRS) score of no less than 504. As it was an all-program draw, invitations were issued to eligible applicants from the Federal Skilled Worker Program (FSWP), Federal Skilled Trades Program (FSTP), and Canadian Experience Class (CEC) – all programs that function under the Express Entry system.

The draw held is the third in a row in which the invitations issued increased by 500 over the previous draw. The draw held on September 14 invited 3,250 applicants and the August 31 draw invited 2,750 candidates. Also, it is the minimum CRS score. That is because all-program draws resumed. CRS scores have been dropping off in growth from 557 on July 6. Over the first five draws, there was a deduction in scores by eight or nine points for each draw. The draw held on September 14 witnessed a decline of only six points, and the draw held this week was the same.

Express Entry all-program draws were paused for more than 18 months commencing in December 2020, as there was a backlog in applications caused by COVID-19 restrictions with regard to travel. During the pause, only applicants from the CEC or PNP (short for Provincial Nominee Program) were issued ITAs (Invitations to Apply). Also, IRCC paused CEC draws in September last year.

A Drop in Backlog

Immigration, Refugees and Citizenship Canada has lately released data that states the backlog for all applications has dropped from 2.7 million to 2.6 between July and August 31. This contains a dent in the number of Express Entry applications that are waiting to be processed. In late July, there were 51,616 persons in the inventory of Express Entry. As of August 31, that number was decreased to 40,180, a drop of more than 10,000 applications in almost 6 weeks.

More than half the applications currently in the inventory are from PNP candidates. This is important owing to the fact that many PNPs are aligned with Express Entry programs, which are known as enhanced nominations. According to IRCC, the application backlog under enhanced PNPs has been reduced. However, there was a rise in applications for PNPs in which candidates apply directly to a provincial government (base PNPs).

Until now in 2022, Canada has issued invitations to 28,039 immigrants through the Express Entry programs. This is part of the Immigration Levels Plan 2022-2024 in which the country was aiming for some 432,000 new immigrants by the end of 2022. To this point, it appears Canada is on track for hitting this target as more than 300,000 newcomers – across every line of business – have been accepted.

Job Vacancies are at an All-Time High

High immigration in Canada aims, including those through Express Entry programs, stems from numerous factors including a job vacancy rate, which presently stands at 5.7%. Also, there is a shortage of competent workers that will be further enhanced as the working-age Canadians and baby boomers’ largest demographic reaches the retirement age of 65 in the coming ten years.

As a reply to the labour shortage, Express Entry will change in 2023. Immigration, Refugees and Citizenship Canada will soon have the authority for issuing ITAs to applicants with a particular work experience, education, or language abilities, which are positioned properly to support the economy and labour force in Canada. This change will cause a great impact on the significance of high CRS for applicants. That is because there are likely to be targeted draws weighing other factors more deeply.

This program (Express Entry) uses a points-based system – the Comprehensive Ranking System (CRS) – to rank the profile of candidates. Candidates receiving the highest scores receive an ITA (Invitation to Apply). Then they can apply for Canadian permanent resident status.

After the candidate has applied, an IRCC officer evaluates the application followed by making a decision. This officer will ask you for biometrics and is likely to arrange an interview or even request more documents. Once this is complete (if approved), the applicant is now a Canadian permanent resident and one step closer to becoming a citizen of Canada.