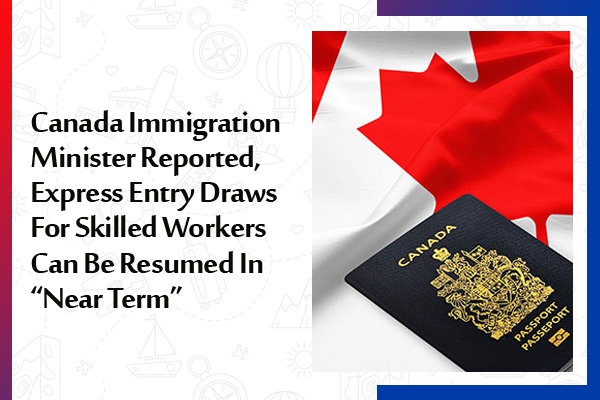 Sean Fraser when asked about Express entry system, replied draws would resume “in the near term” and said that he was looking into how to make this system more flexible.

While the immigration minister said there was no announcement on when CEC draws would resume, but he suggested that they would return “in the near future” and that Express Entry would start to look more normal in the coming years.

“We do need to resume, in the near future, draws for federal skilled workers,” Fraser said. “If you actually look at the immigration levels plan over the next couple of years the balance is shifting back and by year three… a record number of federal skilled workers, including through the Canadian Experience Class, will be welcomed to Canada.

Fraser also said he was looking to add more flexibility to the Express Entry system. He suggested that Express Entry could be used to respond to short-term needs including welcoming people into smaller communities, sectors in high demand, and “people who are coming from a particular region that has the kind of educational institutions that will train the workers we need in strategically important sectors.”

Fraser had previously hinted that occupation specific express entry system could be a possibility in the future in a meeting with Canadian immigration lawyers.

Expanding pathways to permanent residence for international students and temporary foreign workers through Express Entry is one of Fraser’s priorities list. Since taking office in the fall, Fraser has already made the Atlantic immigration program permanent which was one of the other items on the list.

Since September 2021, Canada has only been inviting PNP candidates to apply through the Express Entry system. Fraser has said on multiple occasions that the pause in CEC, FSWP, and FSTP draws is temporary, while IRCC deals with the pandemic-related applications backlog.

As of February 1, about 64,890 FSWP and CEC candidates are waiting for decisions on their immigration applications. The 2022-2024 immigration plan is calling for fewer Express Entry immigrants this year than there are in the backlog. In 2022, Canada is expecting to admit 55,900 immigrants through EE not including PNP candidates. The following year, Canada is currently slated to welcome 75,750 Express Entry immigrants.

By 2024, Canada is expecting to welcome a record number of 111,500 immigrants through Express Entry. Fraser will table the next immigration levels plan for 2023-2025 in the fall of this year. By then, the targets for 2023 onward could change.