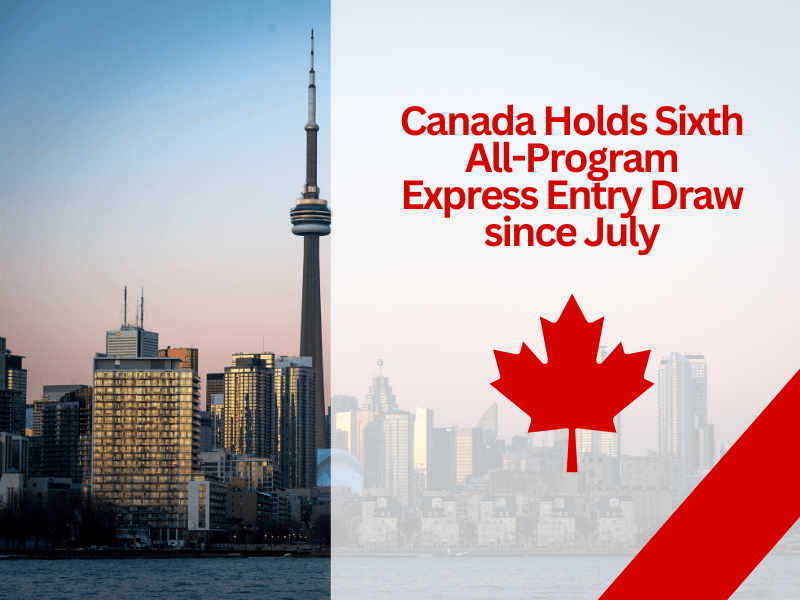 Immigration, Refugees, and Citizenship Canada (IRCC) issued 3,250 invitations to apply in the Express Entry draw that was held lately, the sixth since all-program resumed on July 6.

The lowest cut-off Comprehensive Ranking System (CRS) score was 511. There was no program specified for the draw, which signifies that ITAs were issued to candidates from the Canadian Experience Class (CEC) and the Federal Skilled Worker Program (FSWP), and the Federal Skilled Trades Program (FSTP). Express Entry is one of the most important pathways if you want to immigrate to Canada.

Until the last draw on August 31, the number of candidates receiving Invitations to Apply (ITAs) grew by 250 with each draw. Last week witnessed a marked rise in 500 ITAs and the draw today is a continuation of that trend. Also, there has been a steady decline in the minimum CRS score, which has lost between eight or nine points each draw. However, this draw is not similar as there was only a five-point decrease. The lowest CRS score in the July 6 draw was 557.

IRCC paused all-program Express Entry draws for more than 18 months, starting in December 2020. During this time, only those candidates who were eligible for permanent residence (PR) under the Canadian Experience Class (CEC) or the Provincial Nominee Program (PNP) were invited to apply. But CEC draws were too paused in September 2021.

Canada is on Track to Welcome Approximately 432,000 Immigrants

Canada will break its current record of 405,330 new immigrants in a year, as stated by Immigration Minister Sean Fraser. As of the end of June, the “Land of Maple Leaf” has already welcomed over 300,000 new permanent residents in 2022.

Until now this year the country has welcomed 40,785 immigrants through Express Entry. It is possible that if immigration carries on its current speed, Canada could have surpassed the 2022 Immigration Levels Plan target of around 432,000.

IRCC, to facilitate these numbers, has taken on measures like making the process of application 100% digital and hiring an extra 1,250 new staff numbers.

Canada goes on pushing for more immigration as it tries to deal with a traditionally low rate of unemployment and more than one million job vacancies as well. The augmented amount of retirement over the next decade, merged with a low rate, denotes Canada is not in a position to support the labour force or economy without immigration.

To target gaps in the labour force, IRCC plans to make a major change to Express Entry in 2023. These changes in particular would give the authority to the department for issuing ITAs to people with specific education, language proficiency, or work experience. It could be any applicant from groups they believe will be well-positioned for supporting the economy and labour force in Canada. This will have a great impact on the significance of CRS scores in some cases and they will probably become less crucial in some draws likely to be held in the future.

In June, Immigration Minister Sean Fraser explained the foundation for this proposal while on stage at collision, a technology conference, asserting “If we can project skills that are needed over the next 20 to 30 years, we can bring people who can hit the ground running and make a major economic impact.”

Express Entry is an application management system for three immigration programs in Canada, including the Federal Skilled Worker Program (FSWP), Federal Skilled Trades Program (FSTP), and the Canadian Experience Class (CEC). All the PNP (Provincial Nominee Program) candidates in the Express Entry pool are already eligible for no less than one of these programs.

Express Entry makes use of a points-based system – the Comprehensive Ranking System (CRS) – for ranking the profile of candidates. Candidates with top scores receive an ITA (short for Invitation to Apply). These candidates can then apply for permanent residency.

After the candidate applies, an IRCC officer assesses the application and then makes a decision. The officer will ask for biometrics and will probably set up an interview or request more documents. If approved, the candidate is now a Canadian permanent resident. Such candidates are one step closer to becoming a citizen of the country.