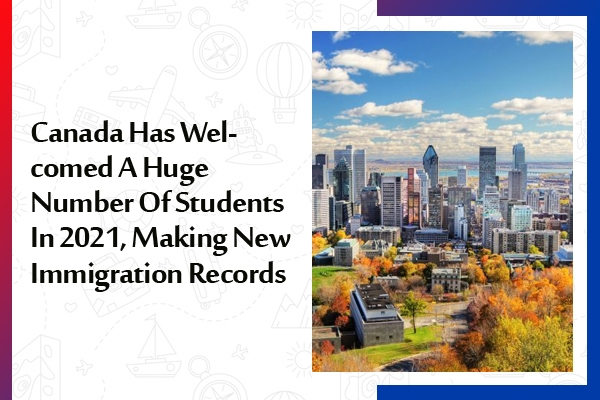 Immigration, Refugees and Citizenship Canada (IRCC) releases data on a monthly basis of new study permits that take effect. These are new students arriving to Canada as well as foreign nationals already living in Canada who successfully obtain a study permit.Unsurprisingly, the period between July and August saw the most new study permits taking effect, over 200,000 in total, right before the start of the 2021/22 academic year.

At the start of the pandemic in March 2020, Canada introduced travel restrictions that affected many prospective students who had yet to enter the country. In October 2020, Canada eased these restrictions which allowed the country’s international student population to recover and explains why Canada saw a record-breaking level of new foreign students arrive last year. The high level of study permits that took effect last year was due in large part to a double cohort of student arrivals; those who wanted to come to Canada in 2020 but could not due to the pandemic, as well as those who intended to begin their studies in Canada in 2021.

Why You Should Study In Canada

Another major contributor to the recovery was likely Canada’s easing of Post-Graduation Work Permit (PGWP) rules. Prior to the pandemic, IRCC did not allow distance learning to count towards PGWP eligibility, but they have temporarily relaxed this policy until August 31, 2022 to help those who want to go ahead with their Canadian study plans amid the pandemic.

In addition to the prospects of gaining permanent residence, international students report they are drawn by Canada’s high quality education, multiculturalism, safety, among other factors. Studying in Canada can also be more affordable than other countries with large international student populations like the United States, Australia, and the United Kingdom. Another major benefit of studying in Canada is foreign students are able to work during their studies, which enables them to support themselves financially and gain more work experience.

India remains by far the leading source country, accounting for nearly 35 per cent of Canada’s international student population. China remains in second, followed by France. India’s significant share can be largely explained by it having the world’s second largest English-speaking population and its large middle class population.

Steps To Apply In Canadian Universities

The first step to study in Canada is to conduct research on educational programs and DLIs. You then submit your applications to DLIs and if approved, obtain a Letter of Acceptance (LOA). With the LOA, you can go ahead and submit a study permit application to IRCC. IRCC will consider factors such as evidence you have a genuine interest in studying in Canada and the financial means to support your study and living expenses, among other criteria. IRCC also offers the Student Direct Stream (SDS), an expedited study permit pathway to residents of 14 countries, the largest of which are India, China, the Philippines, Pakistan, Vietnam, Morocco, Senegal, Brazil, Columbia, and Peru.

Many of Canada’s immigration programs reward candidates that have studied in Canada. One can obtain extra points via Express Entry for Canadian study experience, and a host of other streams operated by IRCC, the provinces, and territories either do the same, or exist only for international graduates. This is due to Canadian government research showing that international graduates tend to have strong labour market outcomes after obtaining permanent residence.