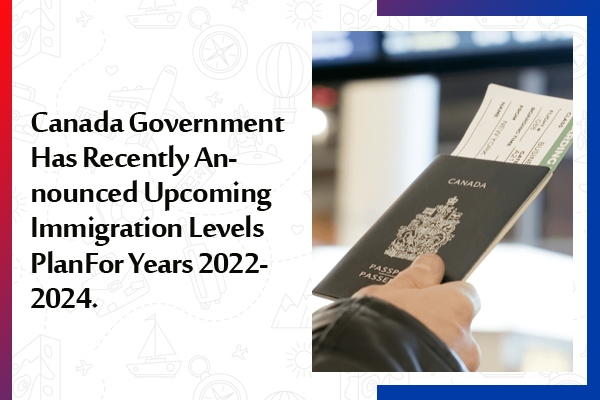 From past few years Canada is taking up prior plans for immigration scales to set future goals. It is increasing immigration targets yet again. It will look to welcome almost 432,000 new immigrants this year instead of its initial plan to welcome 411,000 newcomers.

The announced plan for coming three years is as followed;

Immigration Minister Sean Fraser explained “This levels plan is a balance of needs for our country and our international obligations. It focuses on attracting skilled workers who will contribute to Canada’s economy and tackle the labour shortage, while recognizing the importance of family reunification, and helping the world’s most vulnerable populations through refugee resettlement. Our focus remains on supporting our economic resurgence through increased retention of newcomers in regions with real economic, labour and demographic challenges. I’m proud of what Canada has achieved thus far, and I want wait to see how newcomers will continue to make Canada a top destination of choice.”

In 2022, 56% of new immigrants will arrive under economic class pathways such as Express Entry, the Provincial Nominee Program (PNP), and the Temporary to Permanent Residence (TR2PR) stream that was available in 2021.

In the meantime, Express Entry draws are continuing on a biweekly basis and IRCC is processing Express Entry applications.In addition, most of Canada’s provinces and territories operate the PNP and PNP invitations have been ongoing since the start of the pandemic.

The levels plan guides Canada’s immigration system. It outlines the number of immigrants Canada will look to welcome under its various federal, provincial, and territorial programs. IRCC and the provinces and territories then adjust their operations based on the plan to ensure they are able to attract, settle, integrate, and retain the targeted levels of newcomers set to arrive.