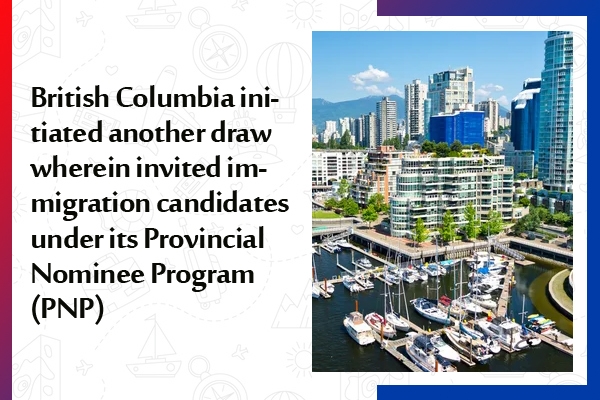 The British Columbia Provincial Nominee Program (BC PNP) invited 126 skilled workers and international graduates with a minimum score of 85 points through the BC PNP Tech stream.

BC PNP Tech is a fast-track immigration pathway for in-demand tech workers and international students. Candidates need to be registered in one of British Columbia’s (BC) existing provincial immigration streams and have a valid job offer of at least 12 months in one of 29 eligible occupations to qualify for the stream.

The province also held two draws for candidates working in health occupations. More specifically, BC invited 20 healthcare professionals who may be eligible for the Skilled Worker, International Graduate, or the Entry Level and Semi-Skilled sub-categories. In addition, the province said it invited “less than five” nurse aides, orderlies, and patient service associates to apply under the entry-level and semi-skilled sub-category. In both of these draws, candidates needed a minimum provincial score of 62.

A total of 20 early childhood educators who may be eligible for the Skilled Worker and International Graduate sub-categories also received invitations. These candidates also needed scores of at least 62 in order to be invited.

Since March, in addition to general draws, targeted invitations are being issued to support BC government priorities, such as supporting specific industry sectors, and encouraging regional immigration.

For the first time since March, B.C. also sent out invitations to Entrepreneur Immigration (EI) candidates. Less than five invitations were sent to those in the EI-regional pilot category.

While the province continues to invite and finalize applications from candidates in the EI-base category, the stream is temporarily paused. The province is currently reviewing the program and has announced that it intends to reopen it to applications in July 2022.

About the BC PNP

The BC PNP aims to attract foreign workers who are in high demand in the province and who wish to become permanent residents of Canada.The BC PNP has two main immigration streams, Skills Immigration and Express Entry, both of which are divided into sub-categories. These streams are managed under B.C.’s Skills Immigration Registration System (SIRS). In order to apply through the SIRS, you are first required to register an account. Once this is done, you will be assigned a score based on factors such as education, work experience, and language skills.

Immigration Minister Sean Fraser have recentlystated before the Canadian Parliament’s Standing Committee on Citizenship and Immigration to IRCC’s application backlogs and processing times.

The parliamentary committee is comprised of elected federal government officials. Their mandate is to monitor federal policy relating to immigration and multiculturalism, as well as oversee the immigration department and refugee board. They conduct studies and make recommendations to guide immigration policy. Minister Fraser was invited on behalf of Immigration, Refugees, and Citizenship Canada (IRCC) to participate in the committee’s backlog study, which began last Thursday.

As of April 29, IRCC’s inventory had more than 2.1 million applicants waiting on decisions for citizenship, immigration, and temporary residence. The temporary residence inventory has doubled since April 2021, in part due to the Canada-Ukraine Authorization for Emergency Travel (CUAET), a measure put in place to support people fleeing from Ukraine.

Processing standards to be met by end of year

Fraser also told the committee that IRCC will aim to return processing times to their standard for the majority of business lines by the end of the calendar year.

“I think we’ll be able to do it—on a majority of lines of business—potentially this calendar year,” Fraser said, “and where we can’t do it, we should be broadcasting those timelines.”

Processing standards refer to the goal IRCC sets to process an application. Standards do not always reflect actual processing times.

IRCC’s efforts to improve wait times for applicants include adding more staff to its 11,000 employees, as well as modernizing the immigration system. Fraser said the $827 million budget to digitize the current system will transform immigration in Canada. Already, efforts to modernize have helped IRCC make 156,000 permanent residency applications in the first quarter of 2022.

IRCC also has $85 million to speed up processing for certain lines of business, such as PR card renewals. IRCC Assistant Deputy Minister of Operations Daniel Mills said these PR card renewals were being processed in an average of 120 days in December, but by now it has been reduced to 65 days.

During the two-hour meeting, Fraser hinted that further changes were coming to the Express Entry system.

“I’m very excited about new flexibilities we’re going to be pursuing in the Express Entry system which will allow us, with more precision, to target workers to fill gaps in key sectors as soon as possible under the current system,” Fraser said before being cut off due to a shortage of time. The minister did not elaborate further throughout the rest of the meeting.

One of Fraser’s mandates as minister is to expand pathways to permanent residence for international students and temporary foreign workers through Express Entry. The minister had previously suggested that occupation-specific Express Entry draws could be a possibility for the future.