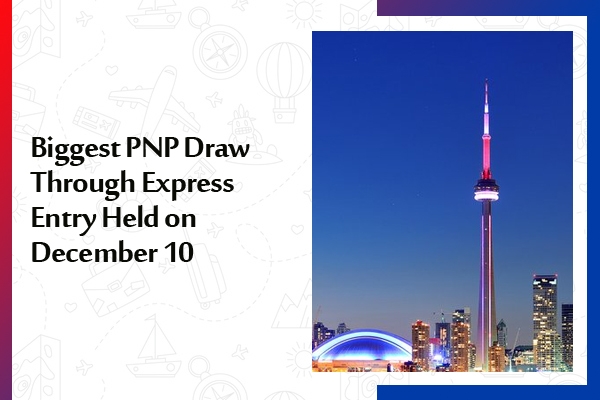 Canadian authorities made new Express Entry draw on December 10, inviting a total of 1,032 candidates to apply for permanent residence. Most of the invited candidates had previously received a PNP nomination which adds 600 points to their base human capital score. As a result, the minimum cut-off for this draw was 698.

Throughout the year, IRCC has only held Express Entry draws that target candidates from the PNP and CEC.

The strategy was supposed to allow IRCC to focus on admitting immigration candidates who were likely already in the country. Candidates who were applying for Canadian immigration from abroad were not allowed to cross the border for the purpose of activating their permanent residency status until June.

However, it has been revealed by IRCC that they are focusing on inland candidates, as well as converting the temporary residents to permanent residents as they have backlog. As of October 27, the backlog for Express Entry-linked programs was nearly 138,000. PNP processing alone had a queue of nearly 38,000, whereas the CEC was up to about 48,000.

From the data of September and October IRCC has processed an average of about 1,700 PNP applications per month. Although it is significantly less than the 14,300 average for CEC candidates, it makes sense considering there are far more applications to the CEC.

In addition to it, it shows us that IRCC has focused processing on CEC candidates, especially since the average for the Federal Skilled Worker Program (FSWP) was slightly more than 500 per month over the same time frame. Before COVID-19, the FSWP made up nearly half of all successful Express Entry applicants.

So far this year, Canada has invited more Express Entry candidates to apply for permanent residence than it did in 2020. Part of this is due to the February 13 draw when Canada invited all 27,332 CEC candidates in the pool at once. The cut-off scores have fluctuated little in recent weeks since IRCC has been holding PNP draws. Due to their relatively high scores, PNP candidates in the Express Entry pool are effectively guaranteed to at least receive an invitation to apply for permanent residence.